Twice a month, the Army veteran loads about 15 animals on to a small plane and flies them from high-kill shelters in the southern US to rescue groups up north. 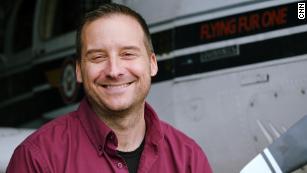 CNN Hero Paul Steklenski
“These animals are perfectly fine and healthy and adoptable — (they) just can’t get out of kill shelters to that freedom,” Steklenski said. “They are getting a private flight to save their lives.”
His efforts — and the need — led him to start his nonprofit, Flying Fur Animal Rescue, in 2015. But this mission was never something he’d set out to do.
In 2013, Steklenski began working at a company closer to his home, which led him to the idea of becoming a pilot.
“I started driving to my new job, and I would pass this small airfield,” said Steklenski, a network engineer. “I don’t know why, but I just decided one day to go in and sign up for flying lessons.”
While training to get his pilot license, his family decided to adopt a dog. The process opened his eyes to a world he didn’t know existed.
“You learn about this huge underground railroad of people who volunteer their time, money, and energy to get these animals out of kill shelters,” Steklenski said. “I became so aware and more compassionate to all animals.”
He got his license a few months later and realized he could do more than fly for recreation.
“I thought, this is a way I can use an ability I have to help move a large amount of animals in a short amount of time,” he said.
Since starting the organization, Steklenski has completed nearly 100 flights to save animals, all paid for out of his own pocket. The organization now has its own plane and transports to rescue groups in New York, New Jersey and Connecticut.
“We’re only in the plane for a short period of time, but that time is so precious to me,” he said. “There are moments we share in that plane that I will never forget.”
CNN’s Meghan Dunn spoke with Steklenski about his work. Below is an edited version of their conversation.
CNN: What did you learn about the need in rescuing these animals?
Paul Steklenski: There is a huge need to help get animals out of kill shelters. I learned that if they don’t get out of certain areas of this country, they don’t live. The further South you get, the worse it gets. And there are so many organizations up north that are no-kill that will take these animals.
Once I became an airman, it was natural. Knowing that I could take a day off from work and quite literally help save the lives of a dozen or more animals just by doing this, that was it. I didn’t need to know any more.
CNN: What’s it like to be on such a small plane with more than a dozen dogs?
Steklenski: Every dog that steps foot on our plane is a ‘paw-senger.’ I’ll look to who is the most scared or the most terrified and know that if I put them next to me, they’ll be calmed. A lot of times depending on the size of my copilot, he’ll kind of shimmy over, and get on my lap and fall asleep.

The team is comprised of University educated and experienced writers from a wide spectrum of backgrounds which allows us to confidently cover all industries and niches. We are able to match the tone and messaging of your story with a writer experienced in your company’s industry.

We know how important it is to choose a professional press release writing service and our team will guide you through the process. With your PR writing services comes a dedicated writer experienced in your niche to meet industry’s highest standards.

Join Us Now!
Back to Top